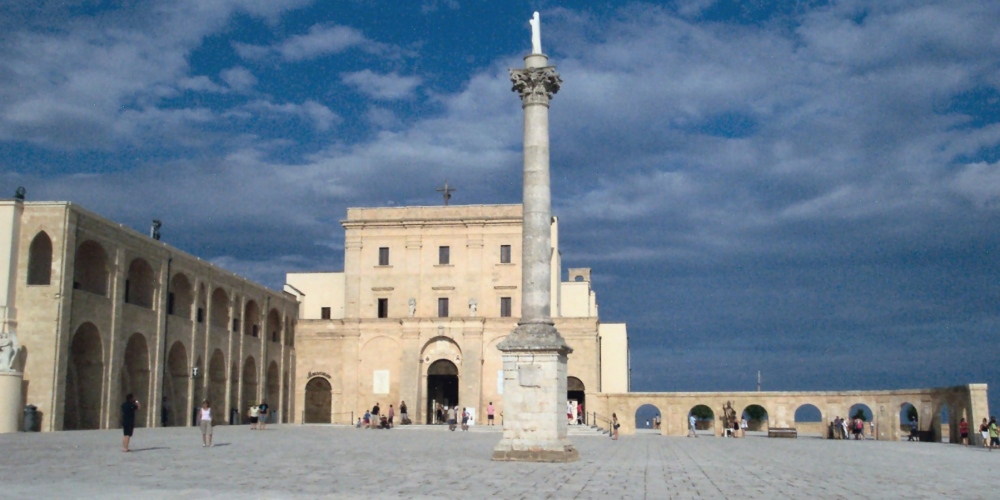 "De finibus terrae", end of the land. A white pearl in the magical place where two seas meet.

Don't miss: the promontory above Punta Meliso, where the Basilica of Santa Maria di Leuca and the lighthouse stand

Santa Maria di Leuca, "de finibus terrae", is a popular touristic town located at very south of the Salento region, where "the land ends".  Santa Maria di Leuca develops along the bay between Punta Ristola and Punta Meliso, in a magical place where it is said the Adriatic and Ionian seas meet. Although this is not really true, it is a matter of fact that from the Sanctuary sometimes is possible to see a chromatic line of separation in the waters, resulting from the mixing of the currents coming from the Gulf of Taranto and the Strait of Otranto.

The main point of interest is the promontory above Punta Meliso, where arise both the ancient Sanctuary of Santa Maria de finibus terrae and the lighthouse overlooking the square. The lighthouse is a white octagonal tower 47 meters tall from the ground and 102 meters from the sea level, and its beacon has lighted the night since 1866. Con la sua torre ottagonale bianca alta 47 metri dal suolo e 102 dal livello del mare, la sua lanterna illumina dal 1866 le notti di questo lembo estremo d’Italia. From here you can enjoy a breathtaking view on each side: the suggestive town of Leuca to the west, the meeting of the seas to the south and the wild landscape of the Adriatic coast to the east. On a clear day you can even see the mountains of Albania to the east and those of Calabria to the west.

The Basilica of Santa Maria di Leuca stands on the ruins of an ancient temple dedicated to the goddess Minerva, as shown by an altar preserved inside the church. According to the legend the basilica, destroyed and rebuilt several times, was consecrated by St. Peter, who landed here in his evangelization journey.

The current fortified layout of the church was built between 1720 and 1755 by Monsignor Giovanni Giannelli, bishop of Alessano, to defend from the several and repeated assaults of Turks and Saracens, whose raids during the previous years ended up with the theft in 1689 of the bell and the column with the statue of Our Lady that was next to the church.

The devotion of the locals for the Virgin of Leuca has ancient origins, dating back to a great miracle that saved the fishermen from a violent storm on April 13th, 365. Whatever the origin, the Sanctuary became destination of pilgrimage for centuries from all over Europe, as the numerous records found also in foreing countries show. Such a devotion is still present in local traditions. A must-see in particular is the procession of decorated boats held on August 15th every year during the celebrations for the Virgin of Santa Maria di Leuca.

A staircase of 184 steps descends from the Sanctuary to the harbour below framing the magnificent Monumental Waterfall, 120 meters long and capable of a flow rate of a thousand liters per second. The waterfall, usually closed, is turned on during special celebrations.

The geographical position of Santa Maria di Leuca made it a melting pot of different mediterranean peoples, thus developing a rich culture well represented by the beautiful nineteenth century villas built alongside the promenade. Most of them were built by the architects Ruggeri and Rossi, each with its own eclectic style. On some occasions, the villas are open to the public and it is possible to visit them freely or with guided tours.

Additional points of interest are the Chiesa del Cristo Re, located in the town center of Leuca - renowned for its mosaic floors and rose window on the main facade - and the Torre dell'Omomorto ("Tower of the Dead Man"), located on the waterfront. The tower is one of many that can be found at regular intervals along the coast. They were once essential for the sighting of turkish and saracen ships. The name "Omomorto" is due to the human bones that were discovered inside the tower.

The promenade and the marina of Leuca are also a great opportunity for a relaxing walk, or to leave by boat towards the several sea caves around. At any time of the day many bars, restaurants and a permanent market offer the possbility to rest a bit, have a drink in front of the sea, or dine on the traditional flavors of Leuca and Salento cuisine.