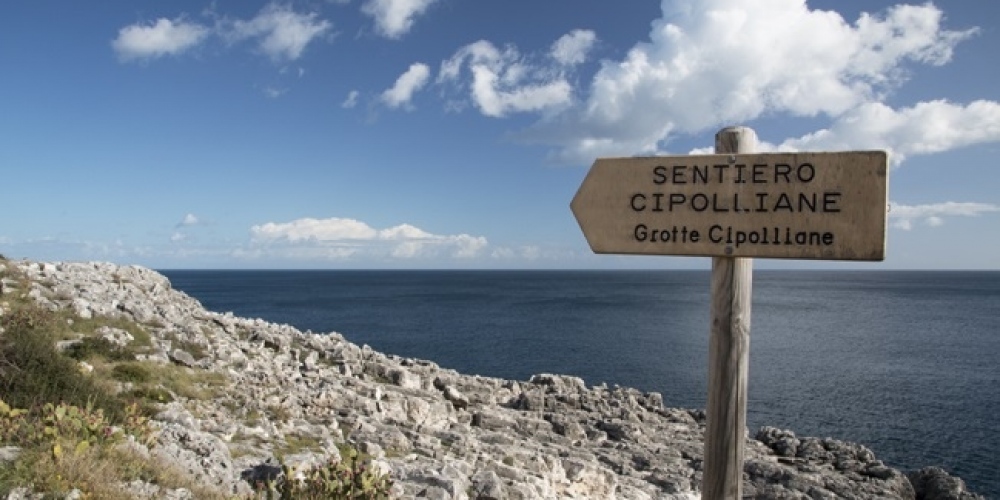 A hiking trail in nature on the Adriatic coast of Capo di Leuca.

It will guide you through the wonders of nature with a breathtaking view.

It starts from a location called Torre Porto Marina di Novaglie, clearly signposted, and it ends in Ciolo. Of course it can be followed in both directions.

2.2 km long, it requires one full hour’s walk. It isn’t an easy path and it’s better to avoid the hottest hours.

Recently it was redeveloped and now you can find small rest areas which are perfectly integrated into the natural environment.

The trail is named after the Cipolliane caves, 30 metres above sea level, which can be visited along the way. These caves (4 large caves and some smaller ones) are precious witnesses of the past: the numerous archaeological remains found here confirm that they had been inhabited by humans since the Paleolithic.

Along the way you will discover the peculiarities of the local flora: the sea fennel, the sea lavender, the caper bushes, the myrtle and, not to be missed, the allium commutatum (called ‘aglio delle isole’, island garlic, in Italian) with its peculiar purple flowers.

As for the fauna, this is where jackdaws and peregrine falcons build their nests.