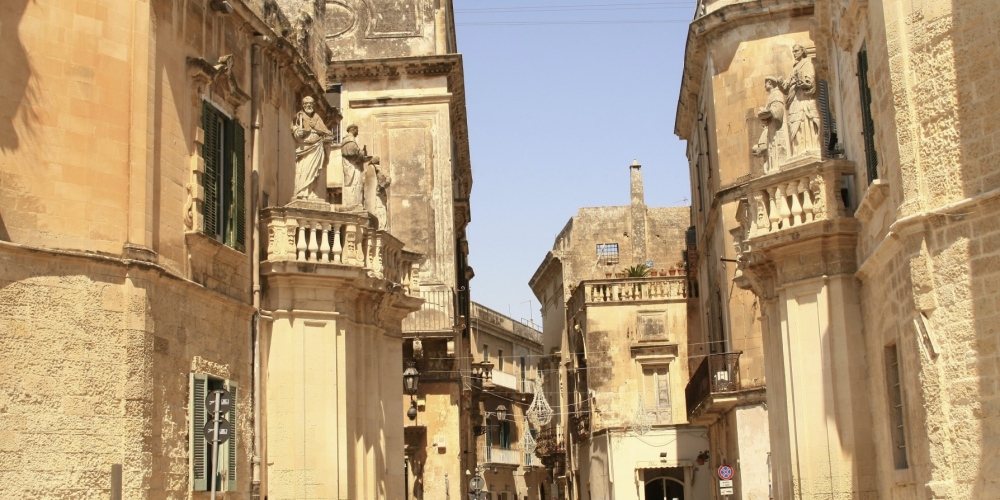 You will be surprised by the beauty of this city: rich in art, culture and traditions.

Let yourself be carried away by a walk in the historical centre, surrounded by warm local stones and fine baroque decorations.

The artistic and cultural heritage of this city is amazing. For those who visit it the first time (and the following times too) it will be thrilling to walk its streets imbued with the warm hues of the local stone, the ancient buildings with beautiful courtyards and decorated loggias, not to mention the wonderful churches and famous squares.

This city has very ancient origins, but the first reliable information dates back to Roman times, although it is likely that the first settlements are even older (Messapian Age). Several monuments and works of art date back to the Roman period: the Amphitheatre in Piazza Sant'Oronzo and the Roman Theatre, just to name two of them.

Extremely charming is the Castle of Charles V, the first core of which was built in the twelfth century and later incorporated, expanded and renovated by Charles V of Habsburg.

Do not miss the medieval church of Saints Niccolò and Cataldo. It was founded in 1180 by the Norman Tancredi along with the adjoining monastery. Tancredi gave the complex to the Benedictine monks who, by order of Alfonso II of Naples, were replaced in 1494 by the Olivetan fathers who remained until 1807.

More recent is the Column of Sant'Oronzo, erected in gratitude to the saint who according to local lore protected the town from the plague that in 1656 struck the Kingdom of Naples.

However, most of the historical and artistic treasures date back to the Baroque period, a distinctive style to which the city is inextricably linked. As a matter of fact, Lecce is almost entirely decorated in baroque style, whose characteristic traits define a peculiar style called Barocco Leccese. The friable local stone, the so-called Lecce stone, easily workable and in warm colours, was used to create fine architectural decorations. Among the symbols that represent the quintessential Baroque art of Lecce we find: the Basilica of Santa Croce, the adjoining  former Celestine Convent with its beautiful facade; the Church of St. Irene; the Church of San Matteo; the Church of Jesus with its beautiful altars; and also the Churches of San Giovanni Battista, Santa Chiara, Sant'Angelo and Santa Maria delle Grazie in Piazza Sant’Oronzo.

In the historical centre, and not only in churches, there are further examples of how the local stone was worked: the balconies and terraces of private homes are decorated with ornaments that grace the city with  a unique beauty and elegance.

Of great importance is the monumental complex of Piazza del Duomo, home to the Cathedral, the 70-metre bell tower, the Bishopric and the former seminary.

Lecce comes forward as a vibrant city with lots of assets, offering its visitors many entertainment opportunities and cultural events, both traditional and innovative and creative. It’s impossible to get bored and not to enthuse about the hospitality of its inhabitants. What you can’t absolutely miss, though, is Lecce’s cuisine. There are plenty of restaurants, often in ancient and picturesque locations, offering typical dishes of Salento, both the more traditional ones and interesting reinterpretations. Some restaurants in town have harvested international recognition, too.

Would you like more informations or how to get there? Please contact us or ask the Reception.