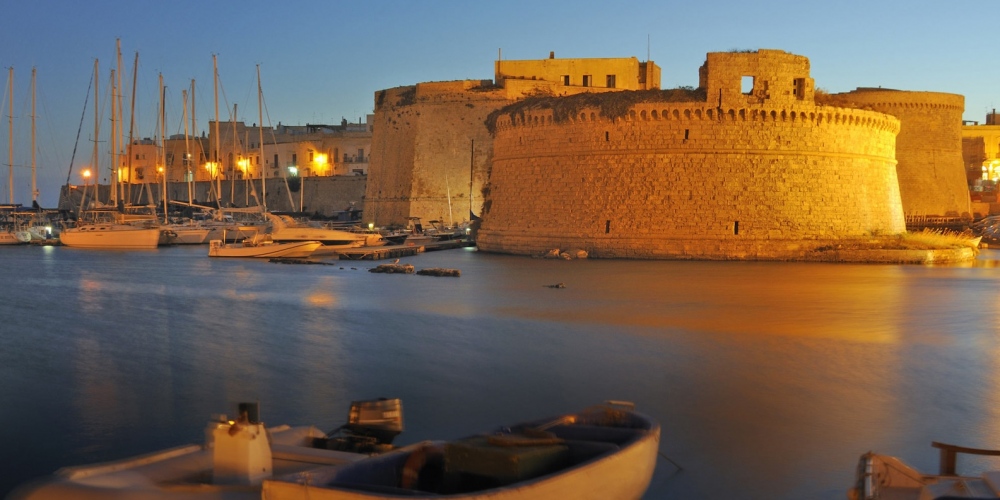 It’s called the "Pearl of the Ionian Sea" and is well worth a visit, although it is crowded in high season.

With its 20,000 inhabitants, in summer Gallipoli boasts hundreds of thousands of visitors and is thus a hugely popular destination, as it offers tourists a lot to do, even if it is not suitable for those seeking tranquility and rest.

It consists of the old town, located on a limestone island connected to the mainland by a seventeenth-century bridge, and of the village which houses the most modern part of the city.

Its origins are very old and there were even prehistoric settlements, but its first real development dates back to the Messapii. Its growing success (which continues today) was undoubtedly due to its strategic location.

Then this village was marked by various dominations through the ages, without sacrificing its vocation to fishing and to the exchange of goods with the East.

The historic centre of Gallipoli is the most beautiful and characteristic part of town, it is a kind of fascinating maze composed by narrow streets and winding alleys, lined with buildings of different periods and cultural imprints. You can also take the scenic route and enjoy a unique spectacular view.

Strolling in town you will come across dozens of historic buildings, beautiful churches and a valuable architectural heritage. Let's not make a list, it will be much more pleasant to discover them by yourselves, or better yet, to visit the city with a guided tour.

However, we can’t but mention the Basilica di Sant'Agata, which is the most important Christian temple of Gallipoli (and it has been since the seventeenth century), located at the highest point of the island and built in perfect baroque style.

Also the very important Greek fountain connecting the old part and the new suburbs of the city deserves to be mentioned. Some people consider it the oldest fountain in Italy (apparently its building started in the third century BC), although scholars disagree about its dating. The water-carrier drew water from this fountain, fresh drinking water which was then delivered to the inhabitants. Below there is the watering hole where animals quenched their thirst.

History and art were crucial for the growth of Gallipoli, although it owes its immense popularity among tourists to its beaches and turquoise sea. Let’s see them in detail.

The beach of Gallipoli is called Purità, in the historic centre: a small beach nestled between the ramparts of the old city. Until the late 60's it was possible to find here unique wooden structures, rudimentary cabins for bathers, no longer visible today.

Leaving the city towards the north, we find Rivabella, Padula Bianca and Lido Conchiglie, all with fine white sand.

Further in the south we find Lido San Giovanni, followed by Baia Verde. Here beaches and cliffs come in succession. In this area there are beach discos, which are highly popular among young people and have made Gallipoli the mainstay of entertainment in Apulia.

Further in the south there is Li Foggi, a town formed by a large coastline and surrounding wetlands immersed in the Regional Natural Park of the Island of Sant’Andrea.

Nestled in this beautiful reserve, we find Punta della Suina, the most famous beach (also a movie set in Ferzan Ozpetek's Loose Cannons). To get there you have to walk through a beautiful pine forest and you will reach crystal clear waters, surrounded by cliffs and sandy beaches.

Finally, the last great beach of Gallipoli is Lido Pizzo, which is extremely clear even when the Sirocco is blowing, and this is peculiar because it is the only beach of the whole Ionian coast in Salento to be flat in this wind, which usually makes the sea rough and less clear.

Would you like to know more or how to get there? Please contact us or ask the Reception.